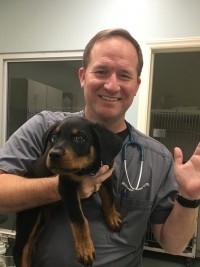 Dr. Ryan Reid
Owner / Director of Facility Services
Dr. Ryan Reid was a member of the 4-H Club while growing up, and his experience helping to care for and raise his Polled Hereford Steer, Big Red, made a permanent impression. The steer arrived at Dr. Reid’s family ranch in the summer of 1991, sick with a severe respiratory disease. After eight months of an intense daily healthcare routine—which included medications and prescription feed, high-powered fans to help lower the steer’s temperature, regular bathing, and more—Big Red recovered and was healthy enough to place second in the race for Grand Champion! Dr. Reid saw firsthand what the power of proper animal healthcare could do, and he hasn’t looked back since.

Dr. Reid is originally from Cedar Creek, Texas, where he grew up as the oldest of four siblings. He attended Texas A&M University to earn his degree in biomedical science, and obtained his Master’s degree in public health at the University’s School of Public Health. Next, Dr. Reid earned his Doctorate of Veterinary Medicine from the University of Minnesota’s College of Veterinary Medicine.

After his schooling, Dr. Reid decided to serve his country as a member of the United States Army. He spent seven years on active duty as a Veterinary Corps Officer, and is currently a veterinarian in the U.S. Army Reserves! After his active-duty service, Dr. Reid entered into the world of private practice. He and his wife, Dr. Shannon Poole, also own Cross Creek Animal Hospital. Dr. Reid has been serving the pets and animal owners of the Fayetteville area since 2014!

Outside of his interests in the veterinary care world, Dr. Reid is an avid marathon runner—his crowning achievement thus far was completing the Walt Disney World Dopey Challenge in 2016, in which he ran 48.3 miles over four days!—and also loves to travel. He and his wife have been to Finland, Denmark, Russia, Italy, and Malaysia thus far, and he hopes to visit Alaska in the near future.

At home, Drs. Reid and Poole share their lives with two dogs, a Border Collie named Diablo and Watson the Sheep Dog, as well as three Maine Coon cats: Sherlock, Tamale, and Mayhem. Dr. Janet Johnston
Associate Veterinarian
Dr. Janet Johnston is a pet owner herself, and she knows exactly how she would like her own animal companions to be treated at the vet’s office. She makes it her mission to offer that same level of care for every patient and pet owner that she meets! Dr. Johnston is proud to help pets and animal parents as a member of the veterinary team here at Academy Pet Hospital.

Dr. Johnston graduated from the University of Findlay in 2005 with her pre-veterinary degree and a chemistry minor, then headed to Michigan State University’s College of Veterinary Medicine to earn her Doctorate. She graduated in 2009 and moved to North Carolina that year, and with the help of several well-established small-animal practitioners in Fayetteville, transitioned from equine medicine into small-animal care. It wasn’t long before Dr. Johnston joined the Academy Pet Hospital team, where we are happy to have her as a member of our family!

Dr. Johnston’s clinical interests include wound management, lameness evaluation and treatment, and soft-tissue surgery. Dr. Johnston is certified in veterinary acupuncture and is even a current member of the International Veterinary Acupuncture Society (IVAS).

When she’s not helping pets here at the clinic, Dr. Johnston likes playing tennis, hiking and camping, woodworking, dabbling in arts and crafts, and traveling. She’s also an avid horseback rider and even trains ex-racehorses to be hunter and jumper prospects. Dr. Johnston lives in the country with her husband, daughter, a pair of dogs, and three horses.
/* */
We use cookies to ensure that we give you the best experience on our website. If you continue to use this site we will assume that you are happy with it.AcceptPrivacy Policy